So, now that we do know all the basic attacks and defences we can move to the interesting stuff. Remember our very first dagger exercise? It’s time to add some variation to it. 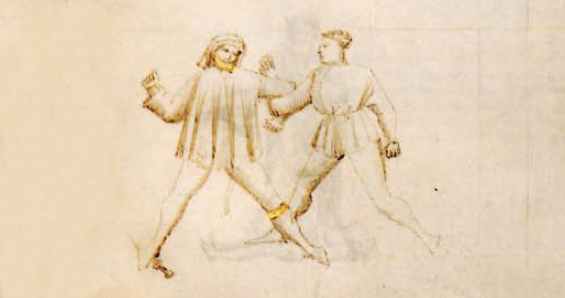 The scenario goes as follows: the attacker comes in with a mandritto fendente (with a dagger). The defendant – that’s you – starts in porta di ferro. As usual, you stop the attack with your left hand. But that’s where the familiarity ends. Instead of disarming your opponent in the normal way, you slide into a lock (pictured above).

Locks are risky things, our teacher explains: they work both ways. Sure, your opponent’s arm is stuck, but so is yours. Coming up with a counter to your defence is no great task. Explaining it is a little trickier, but I’ll try.

As you begin to lock the attacker’s arm (with the intention of bashing his jaw or doing some other equally effective attack), the attacker acts all surprised and allows you to enter the lock. It’s a trap! Just before you finish getting the lock in place he strikes, reversing the lock, grasping his locked right hand with his left and twisting your arm – and you – to his left side and down to the ground. To speed your fall he can trip you by placing his right leg in the way of your left one. After you’re comfortably on the ground he reaches for your dagger, wrestles it out of your hand, and you can guess the rest. (A friendly tap on the mask – or, my technique, waving it uselessly above my pair’s head.)

Rather surprisingly I don’t have real problems with reversing the lock. Sure, I don’t always succeed, but I do catch the right moment to act quite effortlessly more often than not. Huh. I can’t be doing anything wrong – after all, I am sending people far stronger and bigger than me towards the ground.

After this exercise we move on to fighting with swords, which means that we’re well into our final lesson. In the next post (which will hopefully not be as late as this one was) we’ll look at the end of the second drill.