Once we’re done with examining the unarmed guards we move to the dagger exercises (more specifically, the dagger flowdrill). After that comes solo sword cutting practice and then our new sword exercise: the fourth step of the first drill.

It’s been a while, so I better quickly go through the steps that we’ve learned so far: First, the attacker comes forward with the mandritto fendente. Second, the defendant parries the attacker’s blow and attempts to cut him. Third, the attacker shields himself from the defendant’s cut and comes in with a pommel strike.

The attacker might now think: “Ha! I’ve used my sword as a shield and my pommel is a split second away from my opponent’s face! There’s no way I can lose now.” He’d be wrong. The fourth, final step of the first drill lets the defendant get the last word. 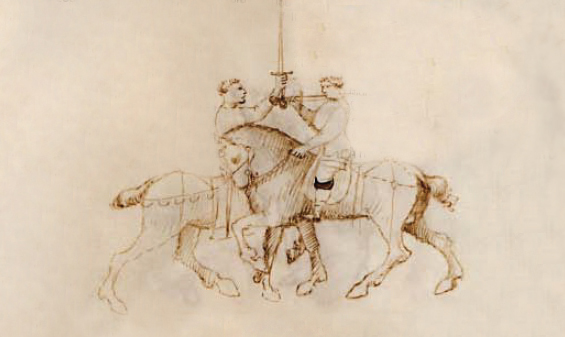 (We didn’t do this on horseback. Getting horses up to the second floor would be a pain. Not to mention the mess they’d make…)

This ends the drill. Fiore says: “If you know any more, give me a good portion of your wisdom.”

The pommel strike to the face is easy enough, as is pushing an elbow, but the “pushing the arms of the attacker away” has me confused initially. It looks a bit strange when you see it for the first time, probably because the defendant uses his arms to push the attacker, not his hands (those are gripping his sword). At first I’m not sure how to do it, but it turns out it’s just a matter of trying it a few times and finding the right angle/way of doing it.

So, that’s that! First drill all done, yay! And well over half-way through the beginner’s course! Yay! (Maybe I’ll actually get this account of the course finished one day…) The only thing clouding my mood when we do the ending salute is the fact that my upper back started hurting again.

Here’s the recap of the entire first drill:

Step 1: The attacker starts in the guard posta di donna, the defender in porta di ferro. The attacker steps forward (full step, passare) and cuts down with a mandritto fendente. He checks measure and steps back (tomare). If he was too close or too far he adjusts the distance and the first step is repeated.

Step 2: The attacker comes in with a cleaving blow again. The defendant raises his sword to parry the attack and ends up in the guard posta frontale.

(Step 2 continued:) The defendant steps to his right (off the strada) and cuts and/or stabs the attacker (meaning that he either taps the attacker’s mask or waves his sword in front of the attacker – I tend to do the latter). After this both go back to their starting positions.

Step 3: The attacker attacks with a cleaving blow, the defendant parries. The attacker raises his sword to prevent the defendant from cutting him, walks forward and lands a pommel in the attacker’s face (tap on the mask). Back to starting positions.

Step 4: Attacker attacks with mandritto fendente, defendant parries, attacker shields himself and walks into close range with his pommel at the ready. The defendant now lifts his sword up and to the right, derailing his opponent’s pommel strike and landing one of his own on the attacker’s mask. No counter-counter-counter-remedy follows. (Thank God! Such a blog post title would be ridiculous.) Back to starting positions. Switch sides. Repeat.